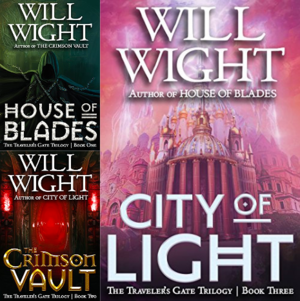 The first series written by Will Wight, Travelers Gate follows Simon, Leah, and Alin in a fantastic for of dimension hopping and magic.

"Simon can only watch, helpless, as his family is killed and his friends captured by enemy Travelers - men and women who can summon mystical powers from otherworldly Territories. To top it off, another young man from Simon's village discovers that he's a savior prophesied to destroy evil and save the realm.

Prophecy has nothing to say about Simon. He has no special powers, no magical weapons, and no guarantee that he'll survive. But he sets off anyway, alone, to gain the power he needs to oppose the Travelers and topple their ruthless Overlord. It may not be his destiny, but Simon's determined to rescue his fellow villagers from certain death.

Because who cares about prophecy, really?"