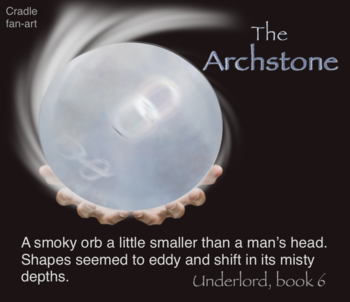 The Archstone is an archlord weapon, forged by a soulsmith long ago. It is an orb filled with hunger madra. When activated, it sucks madra / power from people around it, making the user stronger, if he/she can control the power. If not…. (Skysworn, book 4 and Underlord, book 6)

The Archstone was created long eons ago by an advanced soulsmith. After unearthing it, the black dragons, long-dead rulers of the Ashwind continent, locked it away in the forbidden western labyrinth, according to the Draconic Records.

Recently, Underlord Jai Daishou opened the forbidden labyrinth to retrieve a weapon, hoping to defeat his rival, Eithan Arelius. However, opening the labyrinth attracted the attention of the dreadgod Bleeding Phoenix, thanks to the meddlesome hound of heaven, Makiel.

Jai Chen killed Jai Daishou with the broken Ancestor’s Spear while he was employing the Archstone. This effected Chen’s madra. After he died, Skysworn Captain Naru Gwei took the Archstone to Naru Huan, emperor of the Blackflame Empire. The emperor ordered the weapon to be locked away again. He also censured the entire Jai clan.

Eithan Arelius stealthily retrieved the restricted weapon for Lindon, who needed it for his prosthetic arm, so it could survive the soulfire transformation to Underlord. The Archstone itself was destroyed in the soulfire advancement process. However, both the Archstone and the Ancestor’s Spear have been key components in Lindon’s hungry arm.

"a smoky orb a little smaller than a man’s head. Shapes seemed to eddy and shift in its misty depths. The Archstone." (Underlord, book 6)

"...a box drifted up on a cushion of air. It was sealed with layers of script-circles, and even the Emperor had to use three different keys to open it. With great ceremony, he turned the box toward them and lifted the lid. Several of the others gasped or muttered at the sight of the Archstone, sitting on a cushion. The dull light within swirled as though with motion, and Eithan could sense its hunger tugging at their spirits even from so far away. After only a second or two, the Emperor shut the lid. Its scripts shone, sealing away its power once more. “The Archstone, as described in the Draconic Records. It was sealed deep in the western labyrinth, where Jai Daishou retrieved it.” (Skysworn)