The Beast King is a human sacred artist at Herald level. He’s a background character in the Cradle series, at least up through book ten. He is a Herald keeping the vicious gold dragons out of the Wasteland. He is associated with Sacred Beasts and with Ziel and Northstrider

From the author at Abidan Archives:

Questioner: Has there ever been anyone on cradle who "messed up" their path yet still ascended to the Monarch level? Say someone who, out of ignorance, got a poorly matching iron body, or cultivated a really weird mix of auras.

Will Wight: This is a great question. I like this question. The Beast King is a Herald (right below Monarch) who was crippled as a child while attempting to gain his Iron body. He refocused his Path into communicating with animals, using a mix of life and dream aura. Despite being unable to walk, he ended up befriending some truly ancient sacred beasts, and with their help baptized his body in soulfire and ascended to Underlord. He's now many levels above that, and can walk just fine, but without the foundation of an Iron body he's physically not as dominant as his peers. However, he's guarded by enormous behemoths from the deep places of the earth, so it balances out. (Source - https://abidanarchive.com/events/1/#e224)

The Beast King sat on a log, tearing a hunk of meat between his teeth, grease sliding down his unkempt beard. A campfire crackled in front of him, casting long shadows. He showed no surprise at Ziel’s appearance. (-Ghostwater chapter 14)

The Beast King is a human being, some centuries old. He’s a Herald. The books state that when he was a crippled boy he befriended some ancient sacred beasts. They helped him advance, and eventually he made it to Herald. He is untidy, with a beard and silver eyes. Sacred Beasts inhabit his camp, including the Vastwood Mammoth.

Powers of the Wastelands

The powerful sacred artists in the Wasteland are independent and unaffiliated but sometimes they ally with another, for a cause or perhaps for some gain.

Miles behind Malice, the unaffiliated experts of the Wasteland received her transmitted message and removed their veils. Three Heralds, a Sage, and five ancient Archlords. (Reaper, ch 9)

One Herald is probably the Beast King. Another might be the Vastwood Mammoth. Who is the Sage?

From the short story The Savior of Garden’s Gate:

If he walked through the length of the canyon and emerged out the other side, he would be in the territory of the Beast King, a mighty Herald who was known for taking in strays of all types. Maybe the King would keep him. Maybe the wild beasts who lived in that territory would tear Ziel apart. (source, anthology Heroes Wanted)

Ziel is under his protection?” he asked.
“The Beast King spends all his time in a wasteland of endless battle. He cares about nothing but his war. If he's taken on a human, then that means he thinks this kid will be a critical weapon against the dragons. (Ghostwater, ch 11) 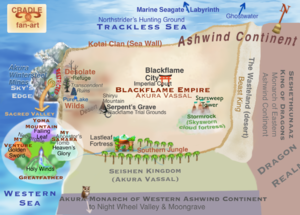 The Wasteland, a Desert Protected by The Beast King

The Beast King is a Herald who guards the Wasteland and the eastern border of the Blackflame Empire from encroaching dragons. His driving impetus seems to be his hatred of gold dragons.

“He's been a legend for centuries. A crippled boy who befriended some ancient sacred beasts and eventually rose to the level of a Herald. He's one of the guardians who stands in the Wasteland between Akura territory and the land of the dragons, protecting human civilization. Or so they say. Without him and others like him, the Blackflame Empire would be a war-torn desert.” (Ghostwater, ch 11)

With the Beast King at large, the Wasteland provides a necessary buffer zone between the relatively small and weak Blackflame Empire and the realm of the dreaded Monarch Seshethkunaaz, a dragon-boy whose territory covers most of the Eastern half of the Ashwind Continent. See map.

Dragon hunters — The Monarch Northstrider, the Beast King (a Herald), and Akura Fury, (also a Herald … until…)

“You should know, there’s been a feud between my family and the gold dragons for generations. Uncle Fury especially. He’s considered just behind Northstrider and the Beast King as a great enemy of dragon-kind.” (Mercy in Uncrowned, ch 8)

On the crumbling pocket-world /island Ghostwater, the Beast King sent his Vastwood Mammoth with Ziel to rescue some Golds unfairly attacked by a dragon Underlady:

Another powerful soul was unveiled somewhere on the island. Yerin couldn’t put a name to its advancement level, but it felt impossibly ancient. Then the mammoth rose over the trees and raised its trunk, trumpeting into the sky. She could see it mostly as a pile of fur in the distance; it looked like a mountain’s pet dog.
The stranger pointed in that direction. “My friend was listening. He’s not happy.” (Ghostwater, chapter 16)