Yerin is the companion of Wei Shi Lindon and the apprentice of the Sage of The Endless Sword. She is currently an Underlady on the Path of the Endless Sword and, following the death of her master, the only known follower. Yerin and Lindon are adopted disciples of the Arelius Family under the order of Eithan Arelius. On top of that she has also joined the Skysworn.

She is said to look thin and scruffy to the point she looks like she has spent the past while camped out in the woods. She cuts her own hair with sword madra in a perfectly straight line to minimize its interference in combat. Initially, she wears a tattered black sacred artist's robe with a thick red cord tied around her waist. Her skin is covered in thin white, regular scars from practicing the Endless Sword technique.

After ascending to Underlady, her scars were wiped away and her hair grew past her shoulders.

Yerin is known to be an intense person with scathing remarks and a sharp tongue. She is often insulting or teasing people/objects for no apparent reason. She also despises her Blood Shadow, as it has murdered many innocent people.

Yerin was known to be a genius in her hometown before everyone was slaughtered by her Blood Shadow. Afterward, she held it down and stopped it from attempting to kill the Sage of the Endless Sword. Although he was completely safe, he was impressed by her willpower and natural talent, and chose to take her on as his apprentice. He challenged her and caused her many injuries and scars, taking her around the continent for training. Near the end of his life, he took her to Sacred Valley to keep her safe from the wider world. After his assassination at the hands of the Heaven's Glory sect, she was driven out of the temple they were using as a base. She met Wei Shi Lindon, avenged her master, and used his Remnant to ascend from Jade to Lowgold.

Yerin is a top-notch sacred artist on the Path of Endless Sword who is consistently able to defeat opponents of a higher level of advancement, or multiple opponents of her level.

While a Lowgold in Soulsmith, Yerin was able to defeat 3 other Lowgolds who tried to attack Lindon. In Blackflame, Yerin as a new Highgold was able to give Jai Long, a Truegold, fear for his own safety until he decided to escape. As a Truegold in Underlord, Yerin (along with her newly advanced Blood Shadow clone) was able to simultaneously fight both Kiro and Meira, Underlord-level opponents, at the same time. The outcome was that Kiro was heavily wounded and the underlords had to escape.

Sword Sage's Remnant: Yerin is bonded to the Sage of the Endless Sword's remnant. This grants her multiple other retractable limbs that end in swords, as well as access to some of the Sage's memories.

Blood Shadow: In Underlord, Yerin gains the ability to release her Blood Shadow, who is able to fight as an independent copy of her with all of her skills and abilities. She is well coordinated with her Blood Shadow. 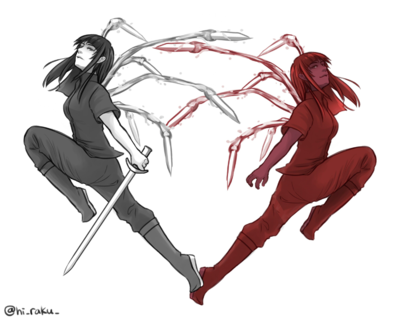 Yerin was taught the Path of the Endless Sword by The Sword Sage, Adama.